Ollie and I had a lovely trip to Staunton Country Park with Helen today. It's the holidays so it was very busy but we had lots of fun playing in the play area, eating ice cream and meeting some MASSIVE bugs in the mini beast encounter. Mini they were not! 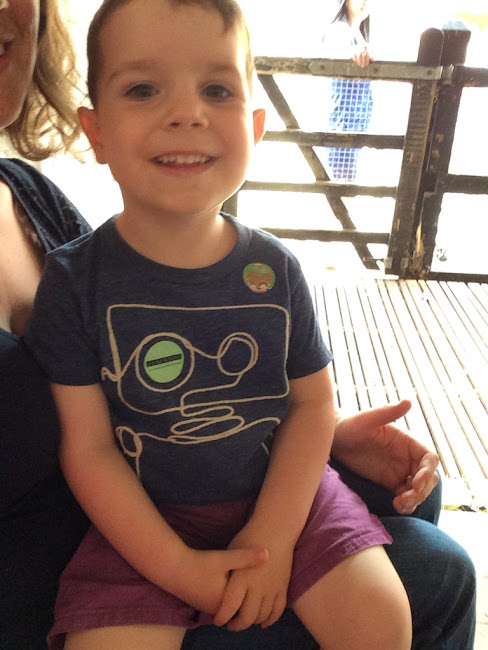 Please note how Ollie didn't want to hold them so I had to be brave! He did decide he wanted to hold the snail at the end but I wasn't able to get a picture. The snail's foot was very strong, you could feel all the muscles working!

To make up for the creepy crawlies, we went to see the baby guinea pigs. Some of them were only a day old so very tiny!

A Wicked Weekend Away

This weekend, I was allowed out for good behaviour. My lovely friend Helen and I have been talking about going to see Wicked pretty much as long we've known each other but not actually got round to it. Helen's husband David bought us tickets to go and see it for her birthday present and we got to stay in a fancy hotel as well! I've known about the trip for some time but had to keep it a secret as it was only revealed to Helen last week, on her birthday. So hard to keep fun secrets!

We went up on the train on Saturday morning. It took a lot of effort to not point out every train we saw as Ollie wasn't with us. After a deliciously sinful McDonalds for lunch, we headed over to the theatre, conveniently located next door to the station!

David had got us special tickets including entry into the Ambassador's Lounge, a teeny room with a bar, private cloakroom and toilet with no queue! We had a glass of bubbly included and as many crisps as we could eat. We also got to look through the programme without having to fork out seven quid, hoorah!

The show was incredible. I've been reading the book and although I've not finished it yet, I have read enough to know that there is an awful lot of graphic violence and sex, along with the fact that, as we know, the Witch of the West ends up dead in the original story of Oz. Well, without spoiling it, the show story is very different to the book. Much more light hearted and a happy ending, hoorah! Our Elphaba was the stand in, Natalie Andreou, and she was just incredible, as were the rest of the cast. I now have the songs going round and round my head! 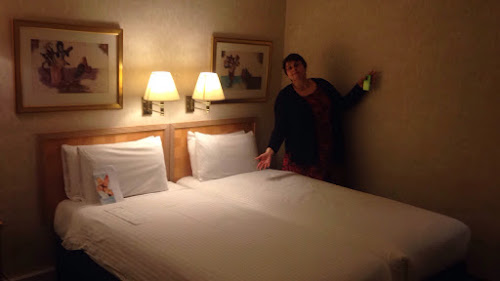 We got to stay in a fancy hotel in Kensington which meant we could have a little look in the shops and pretend we have money!

On Sunday morning, we had a quick jaunt around the V and A, one of my favourite places but very much not Ollie friendly! It was nice to be able to look at delicate things without having to worry.

We then jumped on a bus to Park Lane where we had chocolate afternoon tea at the Hilton, dahling! It was fabulous! Delicious sandwiches as fancy cake along with more bubbly.

It was altogether a fabulous weekend and I had to return to Earth with rather a bump this week! Oh well, plans already being made for a return visit to Oz

Posted with Blogsy
Posted by Ruth at 21:45 2 comments:

The last Saturday of every odd month, I get a day away from home. I spend it in a scout hut in Chichester, spinning yarn. It's pretty much the only time I get to spin at the moment so I make the most of it.

This week I finally finished my beautiful pink baby alpaca. It's taken me over a year as I've spun it really fine and got about a lace weight 2 ply. Lush! It's about 592m and it's about 100g.

Now I've finally finished it, I can start something new! This is 100g of merino (in dark blue, dark green, teal and bright green), tussah silk and nylon. It's spinning up into a peacocky colour. Yum! I wonder how long this one will take me! I'm aiming for a three ply sock weight. 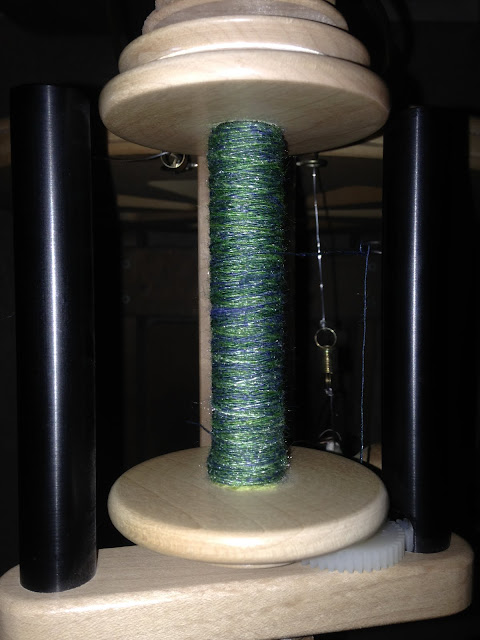 Today, on a whim and need to get Ollie out of the house, we drove up to Petersfield to walk round the lake. We could feed the ducks and play in the playground (and hopefully walk into town for caffeine).

Well, we had a brilliant afternoon. The lake was almost completely frozen over with quite thick ice! The ducks had to walk on the ice except for a tiny bit the sun had been shining on all day. Annoyingly I forgot my camera but got come nice photos on my phone. And, I got my walk into town for a sad little skinny, sugar free latte. I also found a lovely teapot I've had my eye on for ages, in the sale with a set of nice cups too! 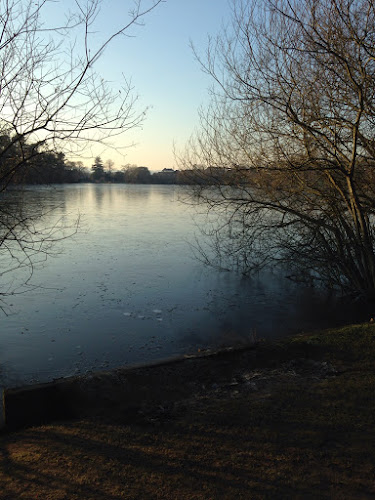 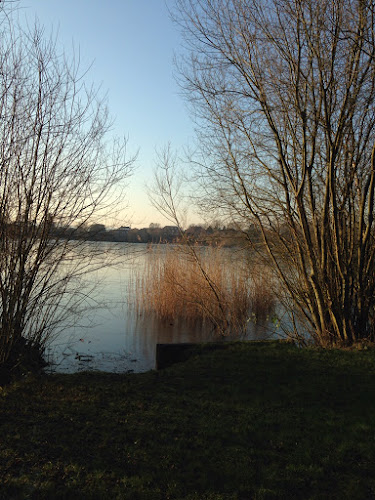 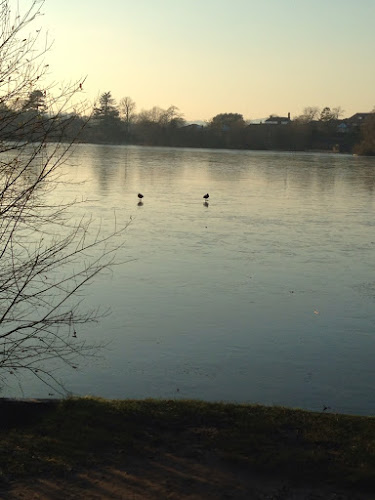 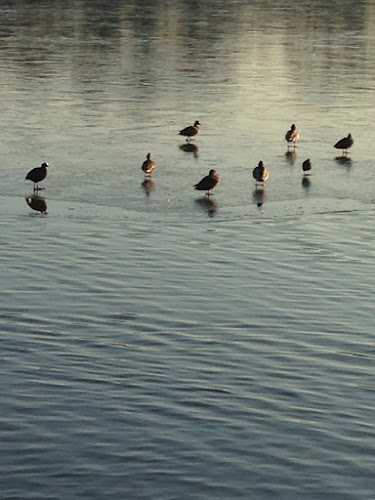 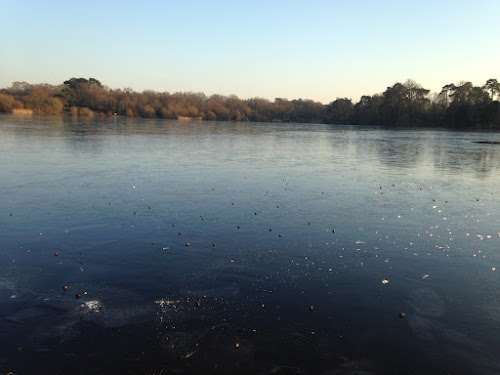 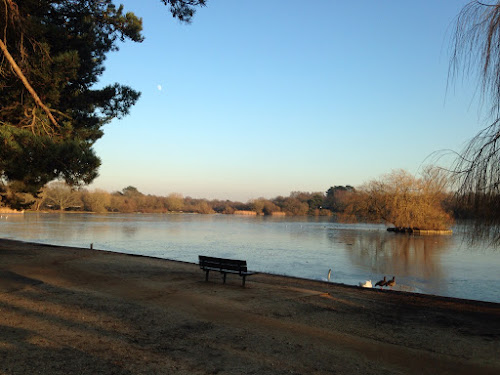 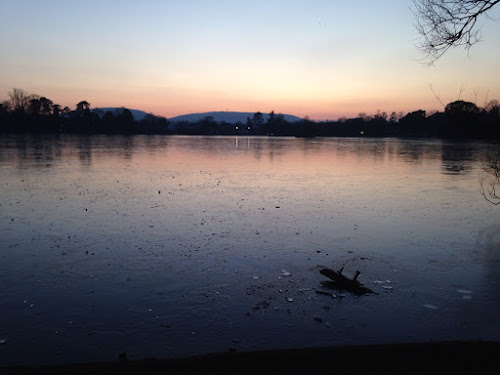 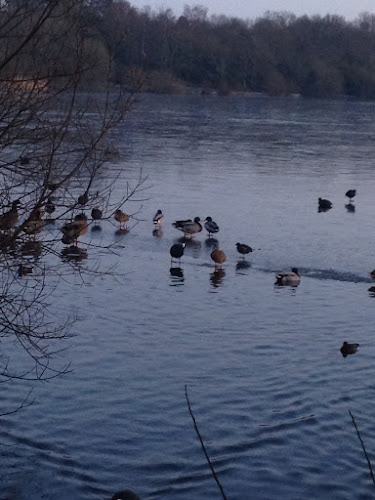 One of my New Years resolutions is to try to finish some projects before starting any more. I've already broken it (oops!) but here I am taking stock of the things I need to finish.

First up is Phill's quilt. It was a Christmas present but sadly I didn't get it finished in time. I about halfway through the quilting so nearly there!

Next is my temperature blanket. I'm recording the temperature for each day and then knitting a few rows in the colour I've chosen for that temperature. So far this year has been a bit green so since I took the picture, I've bought some another blue to try and get some more variation! The pattern is the 10 Stitch Blanket (Ravelry link).

Third is my cross stitch teal alpaca. I've only just started him but it's all the same colour so hopefully will be quite quick!

This is my Que Sera jumper. It's been on the go for a while now. At craft night we have jumper half hour where we knit together on our jumpers in an attempt to get them done! Eventually it will be black. The sleeves are done and the rest is knit as one piece.

Finally is my Clover Sock. I've actually done this pattern before but I did them a bit short so my mum claimed them. These ones are for me! It's a lovely pattern with cables and lace. So pretty! The yarn is Skein Queen But annoyingly I've lost the label.

So, just a few! But I need to get them done as I have lots lined up!

In September, my brother married the lovely Jemma.  Being a crazy person, I decided, having done a bit of patchwork, to make them a quilt.  They are big hedgehog fans so when I saw this pattern, Hazel by Elizabeth Hartman, I knew it had to be done.  This is not a beginners pattern and I had a deadline.  I decided I wanted to make the middle size which involved 25 (!) hedgehogs.  This is because it turns out I have no concept of size expressed in inches.  Like I said, crazy person! 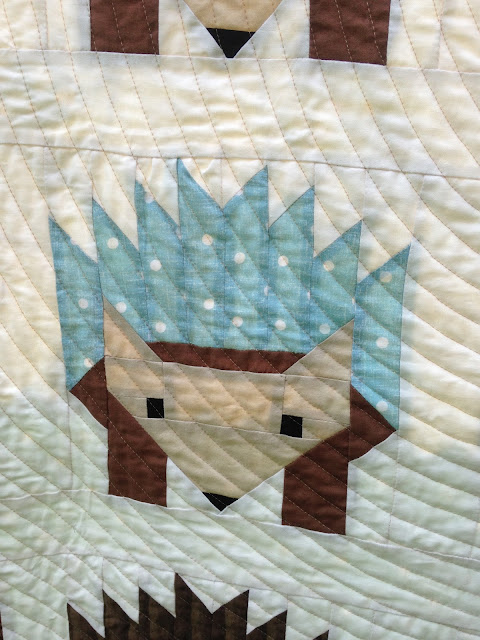 I love love love it and I'm so pleased I got it finished for them.  Thankfully, they like it too!  Next one will be a bit simpler.

Linked up with Crazy Mom Quilts for Finish up Friday
Posted by Ruth at 22:53 9 comments:

Ruth
Havant, United Kingdom
I'm a Speech and Language Therapist and I live in Havant with my husband, little boy and our cats. Expect to see lots of Ollie and the cats! I love to cook and to knit, spin and, more recently, sew. You will also see a lot of my creations!